What types are there and what are they for?


TYPES OF TATTOO NEEDLES ACCORDING TO THEIR ARRANGEMENT

First, you should know that there are mainly 5 types of tattoo needles depending on their arrangement: Round Liner, Round Shader, Magnum, Curved Magnum, and Regular Magnum. Each of them is characterised by the way in which the needles are distributed, and they all have a specific function. We explain what these are:

The Round Liner is a must-have, it is the basic needle for lining. As the name suggests, the distribution of the microtips creates a rounded shape, allowing you to create solid, neat lines.

Groupings are usually formed from 1 to 20 needles, but this amount may vary depending on the artist.

With the Round Shader we enter into the world of shading. Its distribution is the same as the Round Liner, but its microtips are further apart. They are ideal for shading small, detailed areas.

Round Shader groupings range from approximately 3 to 30 needles.

The Magnum, also known as Magnum Classic, is a larger set of needle needles which is made up of two intersecting rows. They are great for packing and shading larger areas because, as they affect a larger area of the skin, the pressure is distributed and allows us to tattoo bigger areas without causing the dermis to suffer so much.

It allows groupings of between 5 and 49 needles approximately, although the Magnum can be used with larger quantities of microtips if the tattoo requires it.

It is also important that you use the Magnum (both the classic and the other types) at an angle, as if you place it perpendicular to the skin you will cause deeper wounds.

Also known as Soft Edge, the Round Magnum is like the Magnum Classic. It has the same distribution of needles in two rows and the same spacing between them, the only distinctive feature that makes the Curved Magnum special is the arched design of its groupings. Its shape is like a Cat's Tongue brush and allows you to shade and pack colour without excessively sharp edges, offering a very smooth finish which is ideal for styles such as realism.

The RM's groupings range from 5 to 49 needles, just like the other Magnums.

Finally, there is the Regular Magnum, which distributes the needles close together in a single line. It is used for dense shading and to create geometric shapes, as its edges will be well delimited when tattooing.

The Regular Magnum allows for groupings of approximately 4 to 11 needles. Again, it should be clear that these quantities may vary depending on the artist and their needs.

In short, when filling in, packing, and shading it is important to choose the right needles, as using a Curved Magnum for a large area can take much longer to fill in and, as a result, your client will suffer unnecessarily for a lengthy period of time. Likewise, we cannot use a Magnum for small areas, as it will make details difficult and could ruin our tattoo.

The diameter of each needle indicates the thickness of the needle. The thicker the needle, the wider the surface where ink is injected.

There is a system that measures this thickness in numbers (gauge), and one that measures it in millimetres and, although they are the same, manufacturers may use one system or the other depending on their country of origin or language. For example, Blue Bird uses the millimetre system, which could be considered the European system. On the other hand, Cheyenne uses the numerical system, also known as the American system.

Here is a measurement reference table:

Another simple but important element is the needle grouping. The grouping determines how close or far apart the microtips are from each other. Easy, isn't it?

Taper is basically the sharpness of the needle point: the distance between the thinnest and the thickest part of the needle. There are 3 main types: Extra Long Taper, Long Taper and Medium Taper. It is a fundamental part when choosing our tattoo needle configuration, as it defines how far we have to push the needle into the skin to reach the thickest point. 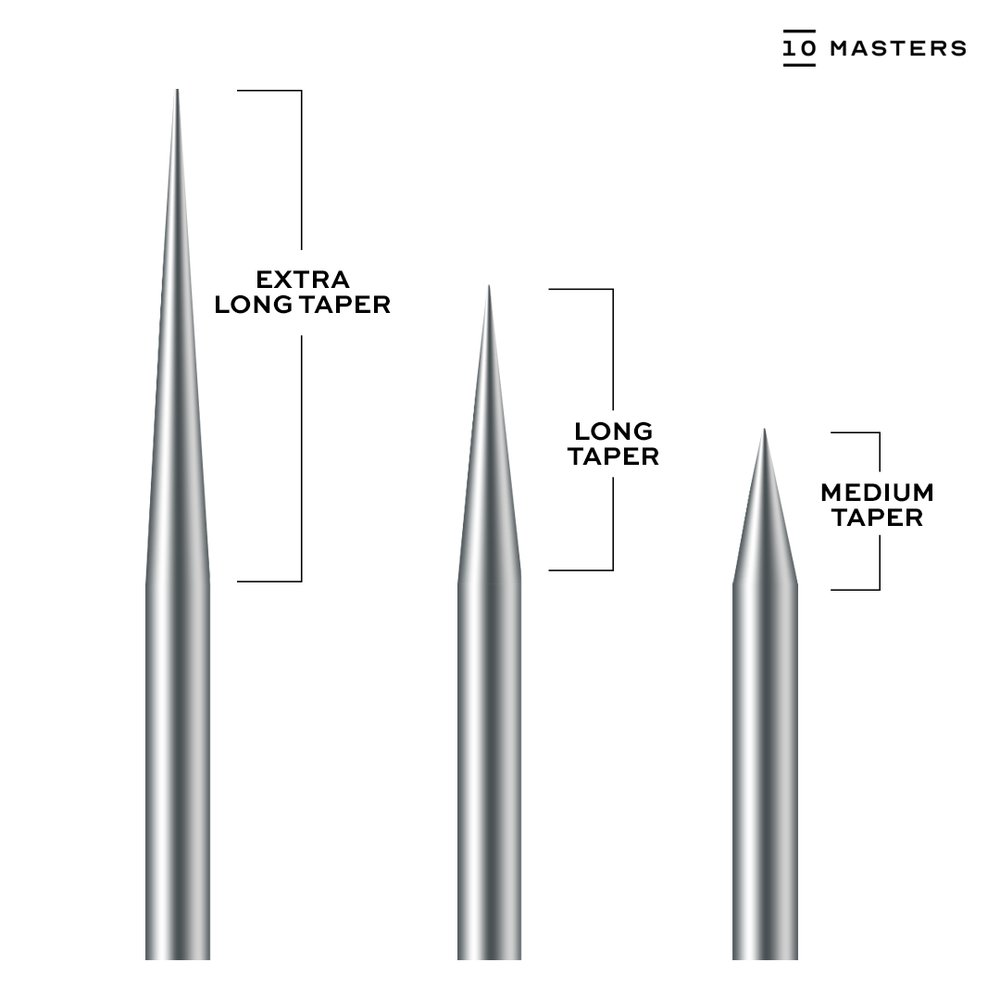 What is each one used for? Let's go one by one…

Configuration is the short form in which we summarise, in a code, the way in which we group the needles. This code defines the diameter (or gauge), the number of needles, the type of arrangement, and the Taper. This will be useful when buying needles for tattooing or remembering configurations that have been useful on other occasions.

Here is an example: 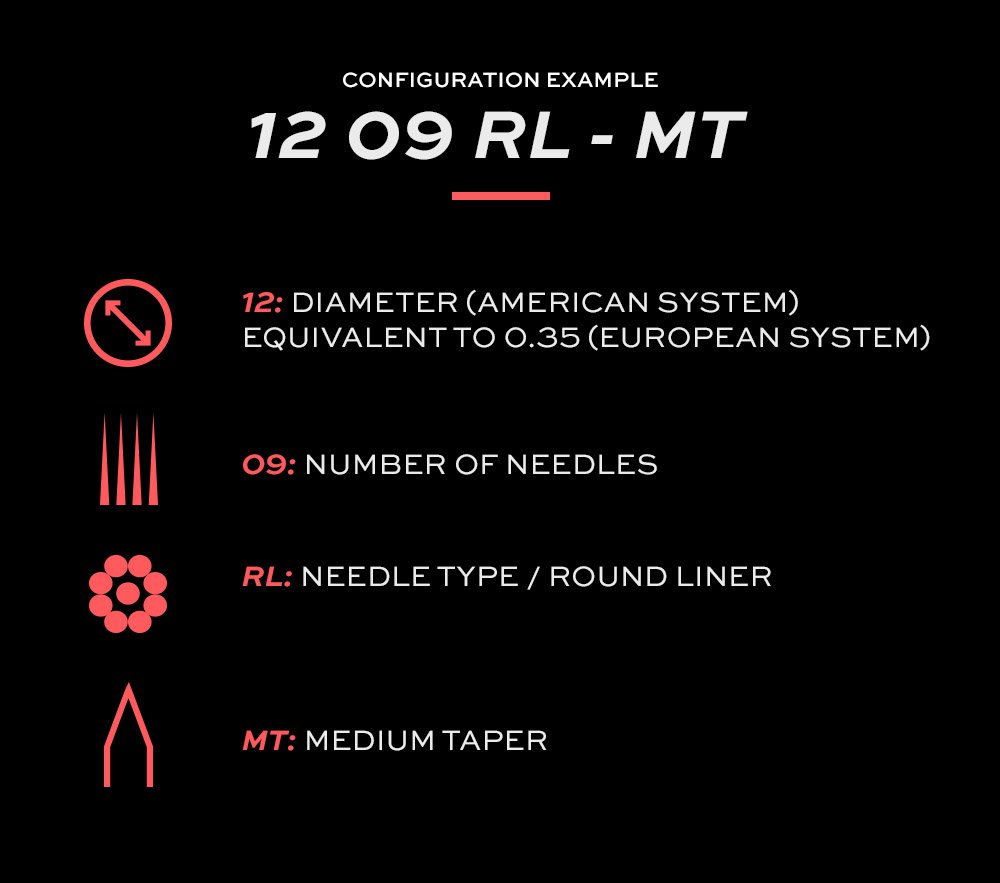 However, it is important to remember that each manufacturer sets this in their own way, so be careful when reading the configurations ;)

Traditional needles are mainly created for coil machines (here you can find the different types of tattoo machines that exist) and cartridge needles are made for rotary machines.

What is the difference between a traditional needle and a cartridge needle? The power that is transferred from the engine to the needle. What does this mean? Traditional needles go from the hammer to the end of the tip, so they are longer, and all the engine power is transmitted through the rod. In the case of cartridge needles, on the other hand, the rod is integrated into the rotary machine and, by means of a pusher system, the movement is transmitted to the needles. In this system, the engine power is not transferred completely to the needle cartridge, as part of it is absorbed by the springs and internal mechanisms of the rotary machine and the cartridges themselves.

We can also find other characteristics associated with tattoo needles, such as textured needles, which are characterised by a textured design, usually in the form of stripes or circles. But... what are they used for? Textured needles are used to slow down the flow of ink, as they retain more of it in the needle. The disadvantage of textured needles is that they are more painful, as the wound on the skin is more irregular than with a smooth needle.

Additionally, there are Capillary Cartridge needles. This is Cheyenne's latest innovation and consists of needles with small filaments that retain ink and allow tattooing sessions to be carried out by dipping the needle into the ink much less often than with a conventional needle.

It is important that you learn to identify a good needle. It must be correctly packaged and sterilised, it must be completely straight, and it has to be well soldered. If it does not meet these characteristics, it is best to discard it.

So much for our tattoo needles guide! Now you know which ones are available and what they're for. Even so, you should know that choosing the best tattoo needle is a very personal matter and each artist makes the most suitable combinations depending on their style, comfort, and the shape of the tattoo. You can get inspired by watching other artists choose; for instance, in our Realism Online Seminar with Coreh López, where you will be able to find a complete tattoo video with a HUD to see which machine, needles, voltage, and ink he uses at each moment. There is nothing better than practicing in order to learn how to choose the best tattoo needles.